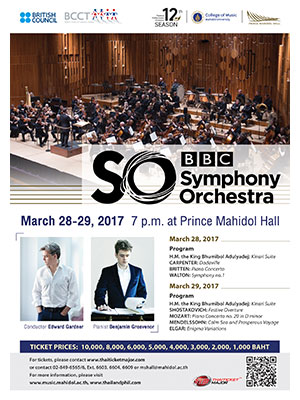 College of Music, Mahidol University in collaboration with Ministry of Foreign Affairs, the British Council and British Community in Thailand has engaged with BBC Symphony Orchestra to perform 2 concerts at Prince Mahidol Hall in March 2017.

BBC Symphony Orchestra, one of the top orchestras in the world, has accepted our invitation to include Bangkok as one of the destinations for their World Tour which takes them to Dubai, Bangkok and Myanmar.
On March 28-29, 2017, it will be the very first time that BBC Symphony Orchestra performs in Thailand and we at the College of Music, Mahidol University in collaboration with Ministry of Foreign Affairs, the British Council and British Community in Thailand are very proud to be the organizers of this event and to dedicate the concerts in memoriam of His Majesty the Late King Bhumibol Adulyadej, as a great music lover and musician. The program includes His Majesty’s musical works. The BBC Symphony Orchestra
The BBC Symphony Orchestra has played a central role at the heart of British musical life since it was founded in 1930. It provides the backbone of the BBC Proms, performing around a dozen concerts in the festival each year. Highlights of the 2015 Proms season include celebrations of Sibelius and Nielsen in their 150th anniversary years and the First and Last Nights, conducted by Sakari Oramo and Marin Alsop respectively.
“BBC SYMPHONY ORCHESTRA WERE ON BLAZING FORM ALL EVENING” THE GUARDIAN, DECEMBER 2014 The BBC SO has a strong commitment to 20th-century and contemporary music, with recent performances including commissions and premieres from Unsuk Chin, Brett Dean, Wolfgang Rihm, Christopher Rouse, Albert Schnelzer and Ryan Wigglesworth. It performs an annual season of concerts at the Barbican, where it is Associate Orchestra. The 2015-16 season includes six concerts conducted by Chief Conductor Sakari Oramo including symphonies by Mahler and Elgar, Total Immersion days devoted to the music of Henri Dutilleux, Henryk Górecki and Louis Andriessen (including Andriessen’s opera La commedia), and the rarely-performed operas by Leoncavallo and Bellini.

The BBC Symphony Orchestra also works regularly with Semyon Bychkov, who holds the Günter Wand Conducting Chair, and Conductors Laureate Sir Andrew Davis and Jiří Bělohlávek. Brett Dean is the orchestra’s Artist in Association. Central to the orchestra’s life are studio recordings for BBC Radio 3 at its Maida Vale home, some of which are free for the public to attend and the BBC SO also performs throughout the world. The vast majority of concerts are broadcast on BBC Radio 3, streamed online and available for 30 days after broadcast via BBC iPlayer.

The BBC SO is committed to innovative education work and ongoing projects include the BBC’s Ten Pieces, BBC SO Plus Family scheme, which introduces families to classical music with pre-concert workshops and discounted tickets, and the BBC SO Family Orchestra and Chorus.
For more information please visit, www.bbc.co.uk/symphonyorchestra Edward Gardner is Chief Conductor of the Bergen Philharmonic Orchestra, a position he assumed in October 2015 leading their 250th anniversary gala concert. The coming season will see Edward touring the orchestra to cities including Berlin, Munich, London and Amsterdam and continuing his hugely successful relationship with Chandos Records.

Edward was Music Director of English National Opera for eight years until July 2015 and under his direction ENO presented a series of stellar productions, including Peter Grimes, Benvenuto Cellini, Meistersinger and Otello. He returned in Spring 2016 to conduct a new production of Wagner’s Tristan and Isolde to critical acclaim.

Edward continues to be in great demand on the international opera scene. He has an ongoing relationship with the Metropolitan Opera New York where he has conducted Carmen, Don Giovanni and Rosenkavalier and will return in Spring 2017 for Werther. Last season he made his debut with Lyric Opera Chicago [Rosenkavalier] and was re-invited to La Scala, Milan following Britten’s Death in Venice in 2011. This season will see him returning to Opéra National de Paris to conduct Eugene Onegin and future invitations include The Royal Opera House, Covent Garden and further engagements at Metropolitan Opera and Lyric Opera Chicago. He was appointed Music Director of Glyndebourne Touring Opera in 2004, a position he held for three years and in 2008 returned to conduct Britten’s Turn of the Screw.

Edward works regularly with the BBC Symphony Orchestra and the BBC Proms and in 2011 conducted the Last Night of the Proms, which was televised live to audiences worldwide. Edward was Principal Guest Conductor of the City of Birmingham Symphony Orchestra for four years and continues to enjoy a flourishing relationship. His other ongoing relationships in the UK include the Philharmonia Orchestra and a continuing association with the Edinburgh International Festival. Edward also works regularly with young musicians including the CBSO and Barbican Youth Orchestras, the National Youth Orchestra and Juilliard School of Music in New York. In 2002 he founded the Hallé Youth Orchestra and in September 2014 was appointed to the new role of ‘Mackerras Chair of Conducting’ at the Royal Academy of Music.

Born in Gloucester in 1974, Edward was educated at Cambridge and the Royal Academy of Music where he studied under the instruction of Colin Metters. He graduated in 2000 and went on to assist Mark Elder at The Hallé Orchestra for three years. During his time at ENO he was awarded the Royal Philharmonic Society Award in 2008 for Best Conductor and in 2009, the Olivier award for Outstanding Achievement in Opera. In June 2012 Edward was awarded an OBE for his Services to Music in the Queen’s Birthday Honours. British pianist Benjamin Grosvenor is internationally recognized for his electrifying performances and insightful interpretations. His virtuosic command over the most strenuous technical complexities underpins the remarkable depth and understanding of his musicianship. Benjamin is renowned for his distinctive sound, described as ‘poetic and gently ironic, brilliant yet clear-minded, intelligent but not without humour, all translated through a beautifully clear and singing touch’ (The Independent) making him one of the most sought-after young pianists in the world.

Recent and future highlights include engagements with the Cleveland and Hallé Orchestras, Bergen Philharmonic Orchestra, Atlanta, San Francisco, Singapore, Melbourne, Washington National and KBS Symphony Orchestras. Major recital dates include Vienna Konzerthaus, Zankel Hall at Carnegie Hall, Cologne Philharmonie, Konzerthaus Berlin, the Lucerne Festival, La Roque d’Antheron, International Piano Series at the Southbank Centre as well as his first tour of South America. The forthcoming season sees Benjamin embark on new collaborations with the Filarmonica della Scala and Riccardo Chailly, with whom he will perform Liszt’s Piano Concerto No. 1, the Tonhalle-Orchestra Zurich and François-Xavier Roth, the Orchestra of St Luke’s and Sir Roger Norrington, and with the London Symphony Orchestra for a performance of Brahms’ Piano Concerto No. 1 under the baton of Alpesh Chauhan.

Benjamin enjoys incorporating chamber music collaborations into his schedule, including performances with the Escher, Elias and Endellion String Quartets, chamber ensembles of the Orchestre Symphonique de Montreal and the Naples Philharmonic, and at venues such as Paris’ Musée du Louvre and London’s Queen Elizabeth Hall. Since the 2015-16 season Benjamin has been invited to participate in the prestigious “Junge Wilde” series by Konzerthaus Dortmund, where over the course of three years he will perform on a number of occasions.

In 2011 Benjamin signed to Decca Classics, and in doing so has become the youngest British musician ever to sign to the label, and the first British pianist to sign to the label in almost 60 years. Benjamin’s 2014 release Dances, a recital album that presents a historically and stylistically varied offering of works influenced by dance, has been described as ‘breathtaking’ (The Guardian), offering “performance after performance of surpassing brilliance and character” (Gramophone Magazine) and won the BBC Music Magazine Instrumental Award 2015. Autumn 2016 sees the release of Benjamin’s third recital disc for Decca, Homages.

During his sensational career to date, Benjamin has received Gramophone’s ‘Young Artist of the Year and ‘Instrumental Award’, a Classic Brits ‘Critics’ Award’, UK ‘Critics’ Circle Award’ for Exceptional Young Talent and a Diapason d’Or ‘Jeune Talent’ Award. He has been featured in two BBC television documentaries, BBC Breakfast and The Andrew Marr Show, as well as in CNN’s Human to Hero series. The youngest of five brothers, Benjamin began playing the piano aged 6. He studied at the Royal Academy of Music with Christopher Elton and Daniel-Ben Pienaar, where he graduated in 2012 with the ‘Queen’s Commendation for Excellence’ and in 2016 was made a Fellow. Benjamin has been supported since 2013 by EFG International, the widely respected global private banking group.