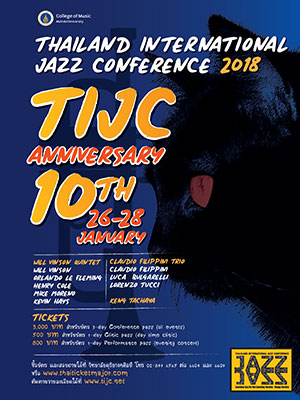 TIJC Performance Series
Well known for bringing in superb-quality jazz music, TIJC will, again, feature the greatest jazz musicians of our time from all over the world. TIJC Education Series
Following the successful TIJC 2009 - TIJC 2017, it's time to get inspired and get your knowledge tank fulfilled once again!!! TIJC Jazz Camp
Find out all you need to know to progress your Jazz skills far forward in our new TIJC JAZZ CAMP during January 22-24, 2018. ALFREDO RODRÍGUEZ (PIANO)
Rodriguez was born in Havana in 1985 and named for his father, a popular singer, television host, and entertainer. He began his musical studies on percussion at the age of seven and training on the piano at age 10. He was enrolled in the Manuel Saumell Conservatory, and later at the Amadeo Roldan Music Conservatory. Gene Coye
Gene Coye was born and raised in the city of Chill (Chicago, Illinois). His mother is from Chicago, and his father is from Belize. He started playing drums when he was about 2 or 3 growing up in the church. He moved to Los Angeles about 4yrs ago where he attends school at CalArts studying music.

Gene is a pretty easy going guy who likes to have fun! He loves to laugh, and people know him for being silly. So far, Gene has been on tours thru Europe, Canada and the United States hitting the East Coast and West Coast and midwest with the likes of The Salvador Santana Band, Santana, Los Lonely Boys, Robert Randolf and the Family Band, and Ozomatli.

As a child, Gene taught himself to play drums.  Throughout his youth, he was mentored by gospel drumming great, Terry Banks.  By the time he was a teenager, Gene was playing in numerous community choirs and jazz ensembles spanning from Chicago to LA, and even formed a tour schedule as a junior in highschool.  Gene recieved his BFA in Jazz Performance at California Institute of the Arts, where he studied under famed jazz legend, Joe Labarbara (pianist Bill Evans’ drummer).  While in college, Gene toured the world with Carlos Santana, and his son, Salvador.  Upon graduating, he quickly established himself as one of the most sought after drummers in Los Angeles.  Of late, Gene has been touring Europe and the US with famed guitarist, Larry Carlton, in addition to playing with James Torme (son of Mel Torme), and numerous other high profile artists in the LA area.

MUNIR HOSSN (BASS, GUITAR)
Knowing Munir Hossn´s compositions and arrangements, one can only begin to imagine his musical and cultural path.He was born in Paranà, a southern state in Brazil, one of the greatest Indian concentration, and rased in Salvador Bahia, heart of the African-Brazilian culture. At the age of 5, his music begins to express itself, he spends hours on his first guitar, a gift from his uncle. CLAUDIO FILIPPINI
Pianist Claudio Filippini, born in Pescara in 1982, is one of the bright young stars of Italian jazz. With his album The Enchanted Garden (CAM Jazz, 2011) he was hailed as the new "wonder boy" of Italian jazz. Now he is regarded as a pianist/composer of international stature, with his album Facing North (CAM Jazz, 2013) receiving widespread critical acclaim. LORENZO TUCCI
Born in Atessa (province of Chieti, in Abruzzo), at a very young age Tucci moved to Rome where he started performing with established Italian and international artists of influence.

Luca Bulgarelli
Luca Bulgarelli was born in Abruzzo in 1972. He began studying electric bass and then double bass. He studied at Siena Jazz seminars in 1992 where he won a scholarship. He graduated in the Lower bass at the Conservatory of Campobasso in 1997. Tachaya Prathumwan
Tachaya Prathumwan was born on 10 January 1989 in Songkhla, Thailand .Keng Tachaya graduated on Thai Music performance at College of music, Mahidol University .Since then, he won the "Coke Music Award" in 2010 .He also won the second place in "The Voice Thailand" game show season 1 on 2012 and from that day, Tachaya Prathumwan becomes popular and most people known him as "Keng the voice". WILL VINSON
Originally from London, Alto Saxophonist/Composer Will Vinson moved to New York City in 1999 and has remained there ever since. Since his arrival, he has appeared and/or recorded with Gonzalo Rubalcaba, Kurt Rosenwinkel, Ari Hoenig, Marcus Gilmore, Chris Potter, Kurt Elling, Lage Lund, Aaron Parks, and many others.

KEVIN HAYS
Kevin Hays was born on May 1, 1968 in Greenwich, Connecticut, USA. He started playing piano since he was 7 years old and became a professional musician since he was 15. Kevin Hays is internationally recognized as one of the premier jazz pianists of his generation. Many of his 15 recordings as leader have received critical acclaim from publications such as The New York Times, Downbeat Magazine and Jazz Times, as well as a "Coup de Coeur" from the Académie Charles Cros (France). A prolific sideman appearing on over 60 records, Kevin s long list of notable musical associations include records with Chris Potter, Joshua Redman, Nicholas Payton, and Al Foster.

HENRY COLE
Born in 1979 in Mayagüez, Puerto Rico, Cole relocated to San Juan in 1999 to study classical percussion at the Conservatorio de Musica de Puerto Rico. He began his jazz immersion at Berklee College of Music in 1998, but soon returned to San Juan, becoming one of the most influential jazz drummers on the island. During this time Cole worked with artists such as Giovanni Hidalgo, Dave Valentin, Jerry Gonzalez, Danilo Pérez, Branford Marsalis, Luis Marin and he had been on toured throughout the U.S. and Europe, Mexico and Central America, Korea, and Japan. ORLANDO LE FLEMING
Among the most proficient and accomplished bassists in the field of contemporary jazz, Orlando le Fleming s virtuoso technique, boundless creativity and powerful beat are those of a musician who has found himself, humbly, occupying a space in the uppermost stratum of American improvised music.