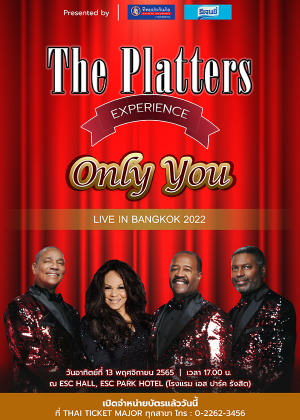 THE PLATTERS EXPERIENCE “ONLY YOU”
LIVE IN BANGKOK 2022

แชร์
THE PLATTERS EXPERIENCE “ONLY YOU”
LIVE IN BANGKOK 2022 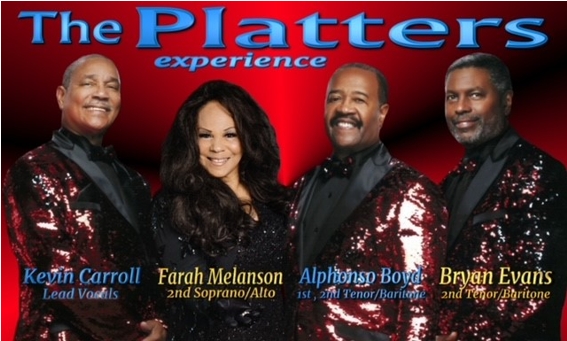 The Platters ,  a band that has  “spanned generations”,  are now approaching 70 years since  first entering  the Rock and Roll  scene. The band is now in its fourth generation. The Platters, have sold more than 100 million records and had 40 Charting Hits on the Billboard 100 between  1955 and 1967. The hits, which are  just as poular now as they were when released ,  incude “ Only You “, “ The Great Pretender “, “ Smoke gets in Your Eyes “,  The Magic Touch ”, “ Remember When “, and “ My Prayer “. They were elected into The Rock and Roll Hall of Fame in 1990.
The Platters Experience is carrying on in the tradition started by  Paul Robi, an original singer,  who had signed on  with the band in 1954. Paul Robi, passed the leader baton to  B.J Mitchell, (  Tenor/Baritone) before he died in 1989. B.J Mitchell who had signed up during the seventies  ( touring and recording with Mr. Robi) would lead the band for the next 30 years until his untimely death in early 2019. Kevin Carroll, who had been Lead Tenor/Lead Singer for over 15 years took over as the new  band leader.

The Platters Experience:
KEVIN CARROLL – ( Lead Tenor/Lead Singer )
Kevin is band leader of  “The Platters Experience”.  He is also known as the man with the “Golden Voice” . He has performed all over the world as  lead singer since 2004. This includes more than 100  large Theater Shows in Brasil as well as numerous National Television Live Broadacast Programs on Globo TV Brasil which has an audience of tens of millions of viewers. Kevin is a native of Los Angeles were he has performed with hundreds of bands in a career that has spanned more then 40 years in the nations music capital.

ALPHONSO BOYD – (First Tenor)
Alphonso Boyd, (also known as Al Boyd) is a multi-talented Soul Singer, performer, producer and hit songwriter. He was a Staff Music Composer for Motown (Jobete Publishing) during the early 1980’s. His credits include “Shakey Ground” performed by The Temptations (co-written with Eddie Hazell of Parliament – Funkadelic), “Blow the House Down” performed by Junior Walker (co- written with Kerry Gordy) and “Take me to the Stars” performed by The OJAY’S.  Al also performed with Dennis Edwards formerly of the Temptations and currently performs with Alphonso Boyd’s “The Men of Motown” He is a native of Cleveland, however, he has performed as a Los Angeles based artist for more than 40 years.

FARAH MELANSON – (2nd Soprano Alto)
Farah is a Los Angeles native. She plays many instruments including the Violin, bass clarinet, oboe, and the flute among many others. Farah has performed with The Mary Jane Girls, Confunkshun, Tribute to Motown, and Hitzville The Show among others. She has performed with The Platters for over 10 years. Farah currently resides in Las Vegas.

BRYAN A. EVANS – (2nd Tenor/Baritone)
Bryan is another Multi-Talented Musician. He has performed or composed on over 25 albums. He has served as Musical Director or Keyboardist on many tours including The Delfonics, The Men of Motown, The Younghearts as well as The Platters Experience Bryan served as Director of youth Music for the The Crenshaw Christian Center from 1996 to 2008.

THE PLATTERS EXPERIENCE “ONLY YOU”
LIVE IN BANGKOK 2022