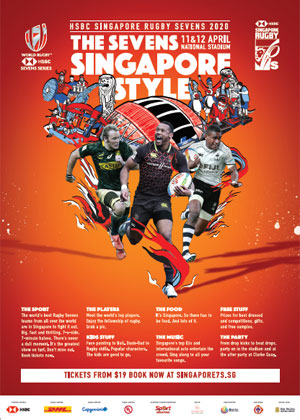 HSBC World Rugby Sevens Series 2020, including the one scheduled to be held at Singapore’s National Stadium on October 10 and 11 have been cancelled by World Rugby in response to continued health concerns relating to the COVID-19 pandemic.

The 2020 edition will build on the success of this year’s event which saw some 57,000 fans enjoy the electric atmosphere at the National Stadium where South Africa ultimately triumphed over Fiji in a 20-19 thriller.

Dubbed the Family Sevens for its family-centric format, in addition to all the on-pitch action, ticket holders will be able to enjoy an extensive line-up of off-pitch entertainment at the two-day Sevens carnival. Highlights include a Family Fun Zone, Splash Party, rugby-themed games and live music.

Full details of the 2020 entertainment line-up will be announced in the new year. And for revellers looking to enjoy the sights and sounds of Singapore after play, Music After 7s returns to Clarke Quay, ensuring that the Sevens party continues long after the final whistle.

The HSBC Singapore Rugby Sevens is part of the HSBC World Rugby Sevens Series. Played on a full-size pitch by teams of seven players, Sevens is a shorter and faster format of rugby. With each half lasting just seven minutes, match-days will run from 9:30 am to 8 pm on Saturday and 11:30 am to 8 pm on Sunday with between-game entertainment including sing-alongs, giant screen games and live music keeping the party atmosphere going all day.