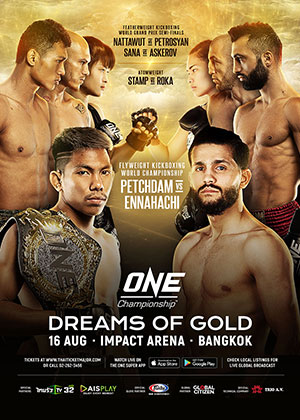 ONE: DREAMS OF GOLD

แชร์
ONE: DREAMS OF GOLD

VVIP ticket holders are entitled to the ONE Experience.
It includes:

The world’s most exciting martial arts action returns to Bangkok on 16 August with ONE: DREAMS OF GOLD!

The finalists of the historic US$1 million ONE Featherweight Kickboxing World Grand Prix will also be decided, with multiple-time World Champions meeting in battle.  The legendary Giorgio Petrosyan takes on Jo Nattawut, while Samy Sana faces Dzhabar Askerov in the tournament semi-finals.

Plus, the queen of ONE Super Series begins her quest to become a three-sport World Champion, as ONE Atomweight Kickboxing & Muay Thai World Champion, Stamp Fairtex, goes up against undefeated Indian superstar Asha Roka in a massive mixed martial arts bout.

With the rest of the card featuring the very best martial artists in the world, fans are in for a sensational night, so mark your calendars, buy your tickets, and download the ONE Super App now!

ONE: DREAMS OF GOLD