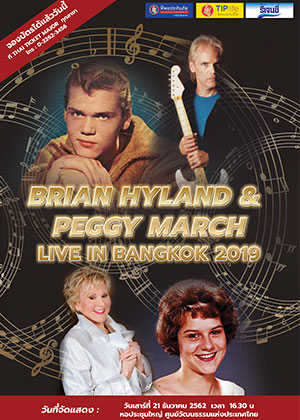 Brian Hyland's puppy-love pop virtually defined the sound and sensibility of bubblegum during the pre-Beatles era. In the years after his teen idol stature faded, he enjoyed a creative renaissance, releasing a series of underrated country-inspired efforts and even making a brief return to the pop charts.

Born November 12, 1943, in Brooklyn, NY. Hyland studied guitar and clarinet while singing in his church choir. At 14 he co-founded a harmony group dubbed the Delfis, which cut a demo they shopped to various New York City record labels. Hyland ultimately signed as a solo artist to Kapp Records, and in late 1959 issued his debut single, "Rosemary." For the follow-up, "Four Little Heels (The Clickety Clack Song)," the label paired him with the Brill Building songwriting duo of Lee Pockriss and Paul Vance, and when the single proved a minor hit, Pockriss and Vance set to work on the follow-up. The resulting "Itsy Bitsy Teeny Weenie Yellow Polka Dot Bikini" topped the Billboard pop charts in the summer of 1960, vaulting the 16-year-old to teen heartthrob status.

After a move to ABC Records, Hyland partnered with the songwriting and production tandem of Gary Geld and Peter Udell for the hits "Let Me Belong to You" and "I'll Never Stop Wanting You." With 1962's "Sealed with a Kiss," a Top Five entry on both sides of the Atlantic, Hyland sealed his reputation as a paragon of youthful innocence and first-kiss romance, perfectly capturing the adolescent zeitgeist in the months leading up to Beatlemania. With 1962's Top 30 hit "Warmed-Over Kisses (Leftover Love)," Hyland introduced elements of country music into his sound, an approach he explored on singles including "I May Not Live to See Tomorrow" and "I'm Afraid to Go Home" and culminating with the 1964 LP Country Meets Folk. While Hyland's music clearly anticipated the folk-rock and country-rock that would blossom in the years to follow, he seemed hopelessly out of touch in contrast to the British Invasion acts now dominating pop radio, and his commercial fortunes rapidly dwindled. Hyland nevertheless forged on, teaming with producer Snuff Garrett and famed session men J.J. Cale and Leon Russell to score a pair of surprise Top 30 hits, "The Joker Went Wild" and "Run, Run, Look and See."

Peggy March (born Margaret Annemarie Battavio, March 8, 1948 in Lansdale, Pennsylvania) is an American pop singer. In the United States, she is primarily known for her 1963 million-selling song "I Will Follow Him". Although she is sometimes remembered as a one-hit wonder, she continued to have success in Europe well into the 1970s.

On April 24, 1963, her single "I Will Follow Him" soared to number one on the U.S. charts. She recorded the song in early January 1963 and it was released on January 22, when she was only 14. March became the youngest female artist with a number one hit, at 15, in late April 1963, a record that still stands for the Billboard Hot 100. The recording also reached number one in Australia, New Zealand, South Africa, Japan, and Scandinavia, although it failed to chart in the UK. March also became the first white female solo artist to hit #1 on the Billboard R&B chart.