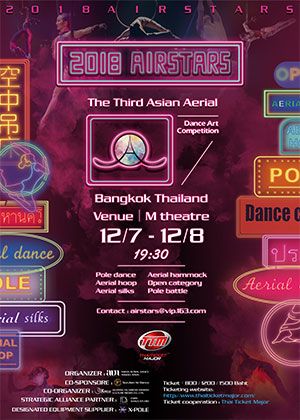 This event will be hosted by Asia Aerial Dance Association(AADA). The first Airstars Asian Aerial Dance Art Competition was held in Guiyang, China in 2016, and the 2nd one was held in
Taipei, Taiwan in 2017. Because of the successful outcome from the 1st and 2nd Airstars. The third competition, which we chose to hold in Bangkok, Thailand, between 7th and 8th Dec. 2018 , will be a high quality and professional competition. This is also the first chance for Bangkok to hold an international Aerial dance competition.
Absolutely, you could not miss it--Pole War.
7th Dec 2018
Maybe you've heard pole dance, and you've heard the 1V1Battle, but have you seen the Battle of pole dance ? Tonight's Pole War presented to you!
The battle of Pole is beginning, who will be the last king of the 8 countries champions?
The final battle of the famous pole dancers, it will lead a person to endless aftertastes!
New competition system - pole dance 1V1 round system competition!
Famous Dancers-Pole War is the invitation system, we invite 8 top Pole dancers on the world stage. Who have won the champion of the international Pole dance competition can participate this competition , such high quality, do you worry that the competition is not good enough? All the competitors are great idols in the Pole dance.
Double the highlights -- bonus points for responses! Would you like to see the dancers defy each other and battle ? !
Special Part: "big devil challenge" -- a winner at Battle can choose to challenge "the battle devil" Alex Shchukin （world champion, the world's first Mr. Pole dancer)
-- every dance movement is the key to victory!
Alex Shchukin Introduction of some competitors :
Parkon Wee- The own-principle of Queen aerial yoga studio (Bangkok), the champion of the aerial hoop of the Airstars Asian aerial dance art competition 2016-2017. Are you a fan of them? Go to the scene and cheer for them!!

8th Dec 2018
Airstars is the biggest art stage of aerial dance in Asia, and Airstars' Champion Night is the center stage with the most spotlight!
。
Airstars is a national high level international art competition, the pursuit of competitive fairness impartiality, Airstars events as Aerial dance landmark events in Asia, is within the scope of Aerial Asia dance events involved in most, most abundant in most countries, stage, has quite a high-profile events in the industry.
The Airstars competition will attract  nearly 200 participants from different regions, including professional competitors and amateurs from the United States, the United Kingdom, Japan, South Korea, Russia, Taiwan, Hong Kong, Thailand, Singapore, Malaysia, the Philippines, Canada and Ukraine. Professional Aerial dancers perform aerial dance competitions with hoop, silks, hammocks and pole.

Champion Night will be the most wonderful part of all the competitions, the best winner of all famous aerial dancers ! Will bring you unprecedented viewing experience!